Optimal for early prototypes, design samples as well as for large components and small batches where perfect surface quality is not important. 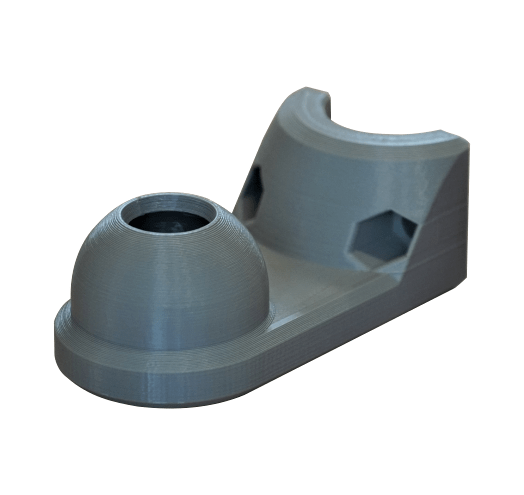 Fused Deposition Modeling (FDM) or Fused Filament Fabrication (FFF) offers the greatest variety of materials in the field of 3D printing. In addition, the largest components are possible with this process. It is ideal for voluminous components and prototypes as well as for series components in the non-visible area.

How does FDM 3D printing work?

Fused Deposition Modeling is a 3D printing process in which a workpiece is built up layer by layer from molten plastic or metal. Also known by the abbreviation FFF (Fused Filament Fabrication), it is the most widely used 3D printing process.

Scott Crump, the inventor of this technology and founder of the Stratasys company, wanted to make a toy for his daughter with a hot glue gun in the 1980s. By extruding (ejecting) the hot glue and laying these ejected webs of material on top of one another, he was able to create three-dimensional components to the delight of his daughter. The so-called melt layering in 3D printers is still based on this simple basic principle, only that plastic is used instead of the adhesive and the gun is guided over axes. Manageable system prices have meant that 3D printers are now finding their way into many private households.

A plastic filament wound on spools forms the basis of the FDM process. It is fed via a feed system to the “pistol”, the so-called hotend in technical jargon, in which it is then melted by the high temperatures. Due to the sustained advance of the material, the now liquid or viscous plastic is pressed through the nozzle. During the extrusion, the complete printing unit moves over two axes (x and y) within the horizontal plane, whereby individual thin plastic webs are deposited next to each other. The third direction of movement is taken over by the building platform. This can be lowered in very small steps in the vertical direction (z-axis). A 3D model previously broken down into layers using a slicing program can thus be printed layer by layer.

FDM printing is a simple, fast and inexpensive way of converting a design previously modeled on the PC into a physical model.

Use this technology to test general functionality and the fit of your components and parts.

The largest components in the field of additive manufacturing can be implemented with the technology and at a low price.

Small batches from the FDM printer are often underestimated. This technology often offers the most economical alternative for many parts.

The FDM process offers the largest selection of our technologies here. Depending on the application, you can choose between flexible, heat-resistant, chemically resistant, UV-stable and of course mechanically strong plastics.

ABS is the most widely used plastic in the world. It is characterized by a high level of heat resistance and very good post-processing options.

The PLA, made from renewable raw materials, is characterized by its high tensile strength. It is particularly suitable for prototypes and bulky components.

This plastic combines the best properties of ABS and PLA. It is tougher than ABS, more heat-resistant than PLA, UV-stable and resistant to many chemicals.

ASA is the ABS for outdoors. The property profile is similar, but ASA has a higher heat resistance and is more resistant to UV radiation.

Polycarbonate (PC) is an extremely tough material. It has a high temperature resistance, which is e.g. ideal for technical housings.

The carbon fiber-reinforced PA6/66 is highly resistant to external influences and particularly good for robust components that have to meet higher mech. requirements.

With an elasticity of up to 480%, high chemical resistance and heat resistance up to 140 °C, the material is suitable for industrial applications.

This material represents a real alternative to conventional materials that are used for technical applications and is both food-safe and compostable.

This material is ideal for critical applications that require a high level of protection against electrostatic discharges, such as electrical enclosures or packaging.

Your desired material is not there?

No problem! We are open to your wishes. We would be happy to check for you whether your material preference can be reliably processed on our printers. Simply contact us using our contact form. We are looking forward to it!